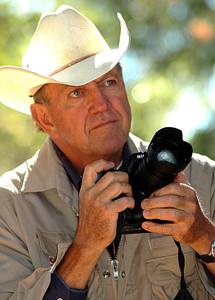 Poppenhouse worked as a creative photo designer for Phillips Petroleum Co. in Bartlesville. His work for Phillips has been an international ticket that has taken him around the world and also has brought him face-to-face with celebrities.

He has observed tribal rituals of African natives and battled minus-85 degree temperatures in Alaska. He's been buffeted by 60-foot waves in the North Sea and been blinded by the darkness of the Amazon jungle in Peru. All for the sake of visual recording.

And he has photographed Luciano Pavarotti, Walt Disney, Robert Redford and a wealth of intriguing faces.

His documentary film on Judith Somogi, the first female conductor of the New York Opera, was honored at the International Film Festival of New York.

He has received the Chicago Award of Excellence, the Cine Golden Eagle, the United States Industrial Silver Screen Award, the American Advertising Federation Award, the Graphex Proclamation in Photography, the Addy Award for Excellence in Advertising, and the Oklahoma Film and Television Producers Association Gold Award.