Climate Change and Covid-19: Their Effect on the Middle East and Energy's Future
About
Fossil fuels have led to a profound increase in world living standards but resulting emissions of CO2 and methane into the atmosphere are a primary factor in climate change. Atmospheric content of CO2 and methane have risen 146% and 257% respectively since pre-industrial time and the rate of increase through 2019 has accelerated. If significant steps are not taken in the coming decade to halt the increase in greenhouse gas emissions (GHG), a phase may be reached in the 2030-2050-time frame described as a “tipping point”, in which steady changes may be replaced by a large-scale change in the climate system. The Middle East is an area of high climate change vulnerability in the coming decades due to extreme temperatures, sea level rise and changing weather patterns.

The Covid-19 Pandemic originated in China, with the epicenter spreading to Europe, then North America and is now in Latin America and the Developing World with a resurgence in the United States. The key to controlling the outbreak is well established; social distancing, masks, good hygiene, testing and contact tracing. Countries that have adopted the correct policies are now able to minimize the effects, but a real recovery will only happen with the development of an effective vaccine. Multiple candidates have reached the stage of clinical trials and are expected to be available in 2021.

The impact of the Covid-19 pandemic of 2020 has resulted in a significant decrease in world economic activity, which in turn has led to a major, if temporary, decrease in greenhouse gas emissions, particularly CO2. This temporary decrease is not likely to materially affect the longer-term process of climate change that is taking place. The significant reduction in energy use in 2020 has not been uniform, coming mainly from fossil fuels along with an actual increase in use of renewables. The dependence of the economies of the Middle East on fossil fuel revenues means that this shift in energy use patterns, if it continues after the Pandemic has ended, will have a lasting effect on life and politics in the region.

The lessons from the collapse of economic activity and drastic reduction in use of fossil fuels in 2020 gives rise to the potential for a “reset” in the coming years considering the changed economic circumstances and accelerating climate change. However, taking all factors into account for the energy industry and the global economy, there are three potential paths:

• Business as Usual: Continuation of energy trends and GHG emissions increase of 1.5-2.0% annual increase prior to the pandemic after economic recovery
• Transition to lower GHG fuels: Freeze GHG emissions at level coming out of pandemic by shift from coal to gas as transition fuel while building up renewables to allow actual reduction after 2040
• Green shift: Continue reduction of GHG emissions during pandemic by massive shift in energy use away from fossil fuels

The effect the different paths could have on Middle East politics, energy policy, economics and climate in the coming decades will be described. 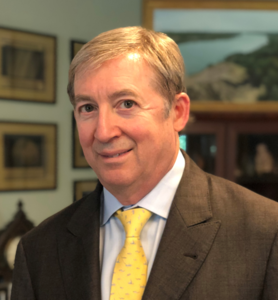 Ray Leonard
President, Anglo Eurasia LLC
Ray Leonard is currently President of Anglo Eurasia LLC, a consulting firm for the Energy Industry and Senior Advisor with Linden Strategies. He has a Bachelors Degree (Honors) in Geoscience from the University of Arizona and M. A. in Geology from University of Texas-Austin. He held executive positions with Amoco, FIOC, the Russian Oil Major YUKOS, the Hungarian National Oil Company MOL, the Kuwait Energy Company and was Chief Executive Officer of Hyperdynamics, a NYSE-listed company exploring for oil and gas in West Africa. He has been active in publishing and presenting on world oil and gas reserves and climate change for many years, presenting at forums such as Council on Foreign Relations (1994/2014), the 26th World Gas Conference (2015) and the World Economic Forum at Davos (2019/20).
You’re registered


This webinar has ended.
REGISTER
All GEO webinars
Powered by BigMarker