Following up on his research article, Advantages of remote research and why you should incorporate this powerful tool, Josh LaMar, Co-Founder and Principal Researcher of Authentique UX, discusses his framework for how to approach remote research, contextualizing it within remote work and the democratization of research. While the coronavirus quarantine may be the impetus for widespread interest in conducting remote research, Josh argues for why we should continue to incorporate it in our future research practice as an important way to iterate in the User-Centered Design process.

Josh LaMar is a Co-Founder and Principal Researcher at Authentique UX, a strategic UX Research thought partner who helps tech companies foster authentic connections with their users to build products based on insights that solve real user problems. His mission is to bring his passion for the transformational role of User-Centered Design and Research to Europe, where he makes his home in Paris, France.

Prior to founding Authentique UX, Josh was a Principal Design Research Manager at Microsoft, where he worked for 12 years conducting research in tablet applications, content consumption, and productivity. As the global Head of Research for Microsoft Outlook, Josh led a team of researchers focused on communication and time management.

Josh is passionate about coaching the next generation of researchers. While still living in Seattle, Josh taught a course in Web Design & Research at South Seattle Community College and regularly guest lectured at General Assembly, the Puget Sound Special Interest Group for Computer-Human Interaction (PS-SIGCHI), and the University of Washington Department of Human-Centered Design and Engineering, where he also received his Masters degree.

In his free time, Josh enjoys discovering the world through travel, language, Art, cuisine, music, and wine. Josh’s first passions in life were Poetry and Music Composition which still inspire him to use both sides of his brain in his creative approach to UX Research and User-Centered Design.

Join us as we sit down for another fantastic evening of case studies, insight, networking and more!

Founder of Tech Circus
Luke is the Founder and Managing Director of Tech Circus. Tech Circus is an independent company that produces educational events for the community of digital design, product & UX.

Luke founded Tech Circus in 2015, having just sold his recruitment company after years of building and establishing various successful businesses. He began by organising a number of pub meet-ups that would soon escalate in scale to become The UX Crunch – which is now the leading UX meetup event in Europe.
VIEW PROFILE 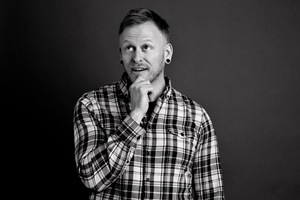 Chrisz Glasz
the webinar will be shown here in an hour?
Registered (123) View all
Attended (89) View all
Recommended
All Tech Circus TV webinars
Powered by BigMarker