The Sikhs & The Panjab

73 years ago, two nation-states were carved by the British mapmaking: Hindustan and Pakistan. The historical Sikh Homeland in The Panjab was divided by the Radcliffe line. In now truncated Indian Panjab, a proportion of the Sikhs led many campaigns to fight for economic, political, state, human, and religious rights. What’s next to secure the Sikh aspirations and the Panjab’s autonomy? 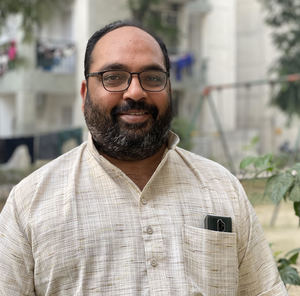 Amandeep Sandhu was born in Rourkela, Odisha. He completed his Master’s in English Literature from the University of Hyderabad. He worked as a journalist and later as a technical writer. His first two books were autobiographical fiction: Sepia Leaves (2008) and Roll of Honour (2012). For the past few years he has written for the media and contributed to anthologies. He now lives in Bengaluru, Karnataka. 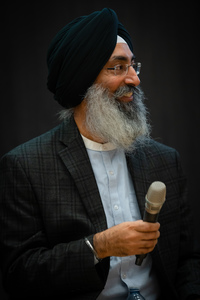 Harinder Singh serves as the Senior Fellow, Research & Policy, at the Sikh Research Institute (SikhRI). He is a widely respected educator and thinker who is deeply in love with 1Force, the Oneness that radiates in all. He co-founded the Sikh Research Institute and the Panjab Digital Library, organized the Free Akal Takht movement, and envisioned Kaur and Singh Academy.
Harinder has authored Emperor-Prophet: Guru Gobind Singh Sahib, Guru Granth Sahib: Its Language & Grammar, and Sikhi: Faith & Followers. As an editor, he has worked on Guru Gobind Singh Sahib & Sikhs in Bihar, The Khalsa Raj: Banda, Battles & Body-Politic, and translated Love Harp (Prit Vina).
Harinder Singh’s list of career achievements includes addressing the U.S. Congress, The White House, U.S. Dept. of Homeland Security, U.S. Dept. of Education, Equal Employment Opportunities Commission, The Smithsonian Institute, U.K. Parliament, and the U.K. Ministry of Defence Chaplaincy Program.
A prolific public speaker, Harinder has spoken at Berkeley, Cambridge, Carleton, Langara, LSE, Northwestern, Oxford, Princeton, SFU, UT-Austin, Williams, Whitman, Yale, as well as JNU, Guru Nanak Dev University, and Punjabi University. He has also presented at the World Affairs Council, Dayal Singh Forum for Research & Culture, The Theosophical Society, Mulnivasi Mahila Sangh, BAMCEF, Chandigarh Museum, Seva Food Bank, Leicestershire Sikh Alliance, as well as numerous Sikh forums and Gurdwaras worldwide. His presentations to the business world included companies such as Accenture, Deloitte, EY, and PwC.
Besides consulting a variety of organizations on curriculums, exhibitions, and films, Harinder regularly appears on radio and television programs globally. He has been featured on many documentaries on Sikh, Panjab, and South Asian matters. He served on the boards of the National Conference on Community and Justice, The Fellowship of Activists to Embrace Humanity, and The Nanakshahi Trust, among others.
Harinder Singh holds a BS in Aerospace Engineering, MS in Engineering Management, MPhil in Guru Granth Sahib, and a Diploma in Persian Language. He is Guru’s Sikh, Panjab’s lover, and Begampura’s Jedi. He currently resides in the United States with his wife and two children.
VIEW PROFILE 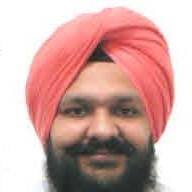 His research interests include; the role of Punjab in India-Pakistan ties, the Belt and Road Initiative (BRI) and the changing nature of Indian federalism. He authored ‘South Asian Cooperation and the Role of the Punjabs’, and co-authored ‘Humanity Amidst Insanity: Hope During and After the Indo-Pak Partition’ with Tahir Malik and Ali Farooq Malik. Maini is also one of the editors of ‘Warriors after War: Indian and Pakistani Retired Military Leaders Reflect on Relations between the Two countries, Past Present and Future’, published by Peter Lang (2011).
VIEW PROFILE
Hosted By