There is a deeply profound sentiment tied to martyrdom in Sikhi as well as in many other faiths groups. Throughout the ages, we have seen challenging circumstances of oppression that have chosen to desecrate the bodies of those who address it.

How do we find and center shukrana (gratitude) within this bleak depiction of reality?
How does the idea of resisting oppressive forces allow us to connect to our inherent mode of being, IkOankar, 1Force?

There are undoubtedly important metaphysical stakes in this kind of conversation. Still, perhaps we need to come closer to more practical lessons that can help Sikhs better understand the concepts of shahadat (martyrdom) and shukrana as they exist in conversation with one another. The trajectory of the webinar will be brought to bear on a living understanding of what it means to be grateful during trying times, ultimately serving as the grounding force for Sikh persistence and resilience. 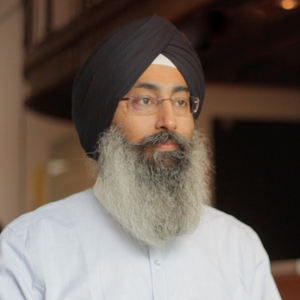 Senior Fellow, Research & Policy, SikhRI
Harinder Singh is a widely respected educator and thinker who is deeply in love with 1Force, the Oneness that radiates in all. He co-founded the Sikh Research Institute and the Panjab Digital Library, organized the Free Akal Takht movement, and envisioned Kaur and Singh Academy.
Harinder has authored Emperor-Prophet: Guru Gobind Singh Sahib, Guru Granth Sahib: Its Language & Grammar, and Sikhi: Faith & Followers. As an editor, he has worked on Guru Gobind Singh Sahib & Sikhs in Bihar, The Khalsa Raj: Banda, Battles & Body-Politic, and translated Love Harp (Prit Vina). 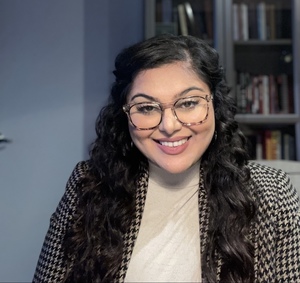 Associate Editor, SikhRI
Kiranjot Kaur is an academic, writer and educator that currently resides in Toronto, Canada. She is a researcher that finds strength and inspiration through Sikh principles like Sangat and Seva and strives to reinvigorate academic spaces with the same divinely inspired passion.

Kiranjot is pursuing her Ph.D. at York University. She holds an M.A. in Religion, Culture, and Global Justice from Wilfrid Laurier University and a B.A. in the study of Religion from the University of Toronto. Kiranjot has a keen interest in higher education and curriculum development. She is particularly interested in how we can genuinely implement critical pedagogies into our public educational institutions. Her doctoral research focuses on bodies of literature relating to post-secular and postcolonial theories and ideas in the philosophy of religion.

Currently, she is writing her first book on postsecularity and spirituality from a Sikh lens and is actively publishing essays through other open-access platforms. She is also the Executive Director for the Decolonized Library Project, an interfaith collective that hosts an online community archive for marginalized peoples. Kiranjot also acts as a mentor and guide to Sikh youth in Ontario.
VIEW PROFILE
Hosted By