In the thirteenth episode of the podcast Angelisa Corbo and Inesa Nicolaescu talked to Mr. Valiant Richey, who is the OSCE Special Representative and Co-ordinator for Combating Trafficking in Human Beings. He represents the OSCE at the political level on anti-trafficking issues and assists the 57 OSCE participating States in the development and implementation of anti-trafficking strategies and initiatives. Before joining the OSCE, Mr. Richey worked as a prosecutor in Seattle for 13 years handling sexual assault, child exploitation and human trafficking cases. He also led a coalition of law enforcement, NGOs, academics, service providers, philanthropists, and policy makers focused on the eradication of commercial sexual exploitation and trafficking in Washington State. In addition, he was appointed by the Attorney General to represent prosecutors on the Washington State Trafficking in Persons Coordinating Committee. He has a Bachelor of Arts and Master of Arts in Political Science from Boston University and a Juris Doctor from the University of Washington. 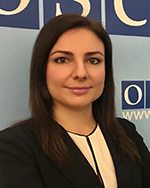 Border Adviser, OSCE Transnational Threats Department- Border Security and Management Unit
Angelisa Corbo is Border Adviser at the OSCE Transnational Threats Department- Border Security and Management Unit. In this capacity, she also manages OSCE projects and activities in the field of Travel Document Security, focusing on the detection of fraudulent documents and impostors at the border.
Prior to the last assignment, she spent two and a half years at the OSCE Border Observer Mission at the Russian Checkpoints Gukovo and Donetsk as member and coordinator of the reporting team.
Before joining the OSCE, Angelisa worked for the Italian Labour Agency – Migration Unit.
She holds a Master Degree in International Relations and Diplomatic Affairs from the University of Bologna.
VIEW PROFILE
Hosted By