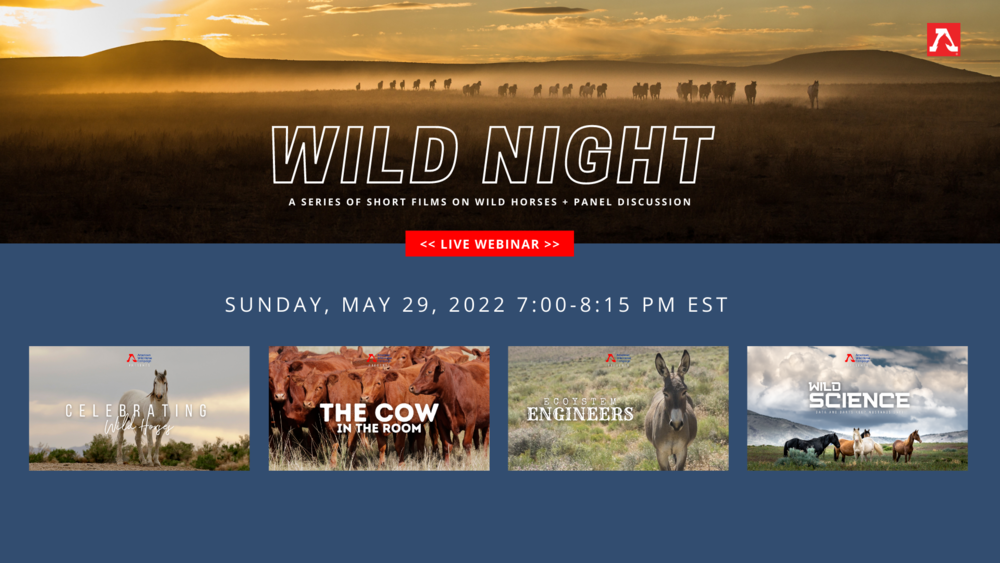 Wild horses capture the American public’s imagination like no other animal. The image of magnificent mustangs running wild on the vast open range embodies the best of America and our independent and free spirit. They are protected by federal law but the odds are stacked against their survival in the West. Some of the largest wild horse helicopter roundups in recent history have occurred in the past year and will continue into 2022.

The American Wild Horse Campaign is leading the way to protect these iconic animals and the western public lands where they roam. Join us to learn about the latest science and the groundbreaking programs being implemented right here in Nevada to keep wild horses wild. A series of short documentaries will be shown and an expert panel discussion will follow.

Greg Hendricks is Director of Field Operations for the American Wild Horse Campaign. He received his B.S. degree in Range Management and Wildlife Biology from Washington State University.  Early within his career, he worked for Carson City BLM managing their range improvement budget.  As an avid wild horse advocate, he has worked to support the Prison Adoption Program in Carson City from which he has adopted two wonderful mustangs. He also represents Wild Horses & Burros for the Bureau of Land Management's Sierra Front N.W. Great Basin Resource Advisory Council.

Erik Molvar is the Executive Director of the Western Watersheds Project beginning his career in conservation, fighting oil and gas projects in Wyoming during the Bush administration, with his signature accomplishment defeating the Seminoe Road Coalbed Methane Project during that time. He is a wildlife biologist with published research in the behavior, ecology, and population dynamics of Alaskan moose as well as large-scale conservation planning. He spent 13 years as a conservation advocate and later Executive Director of Biodiversity Conservation Alliance, and led WildEarth Guardians’ Sagebrush Sea Campaign for three years. Over this period, he became one of the conservation community’s leaders in sage grouse conservation and recovery.

Erick Lundgren is a postdoctoral researcher at OR-HOOS University in Denmark, receives his PhD at the University of Technology Sydney, Australia. His work primarily focuses on novel ecosystems or communities composed of both introduced and native species. Most of his research focuses on large herbivores, in particular equid, in which he has shown remarkable ecological processes hidden by notions of ‘naturalness’.

A landscape photographer of 20 years, Scott Wilson was a multi-year finalist in the UK Landscape Photographer of the Year, before moving to Colorado in 2015, when he was introduced to the beauty and plight of America’s mustangs. Scott closely follows ‘the wild ones' that roam Sand Wash Basin, in northwest Colorado and he has become a committed photo advocate for wild horse conservation, joining the Board of the American Wild Horse Campaign in 2021. Scott was recently named Open Photographer of the Year in the 2022 Sony World Photography Awards and also brought home the Natural World & Wildlife Award for Anger Management, which depicts a wild Colorado mustang kicking up a dust-storm. Scott’s work is on show at Gallery 6 in Denver's downtown Art District and has featured extensively in local, national, and international media, including the BBC, Daily Telegraph, Nat Geo, GQ, and more.

Kris Thompson is a leader in the Reno area business community.  He is the Project Manager of the Tahoe Reo Industrial Center which encompasses 1/3 of the Virginia Horse habitat here in Reno and is President of the Tahoe Reno Industrial Center General Improvement District. Kris is a member of the Storey County Planning Commission and is a retired army cornel who commanded combat troops in Desert Storm and other conflicts.