This talk will focus on challenges associated with building a more inclusive school mathematics: a school mathematics in which classroom practices and discourses are congruent with the diverse ways that different students experience, interact with and interpret knowledge. It will explore how discriminatory visions of students’ potential for learning, compounded by the myth of independence and the artificial separation of cognition from emotion, deter or disallow some learners from engaging with mathematics. I will argue that the hegemonic use of tools and/or curricula designed with some notion of a normal body in mind contributes to the disabling – even exclusion – of many learners who inhabit what come to be labelled as deficient or deviant bodies. An alternative vision will be offered in which, rather than deficiency, difference is treated as diversity, inspiration, expansion, challenge, disruption, and as renewal. Example of ways of working mathematically, designed with this view of difference in mind will be presented, with the aim of examining their relevance beyond the particular contexts in which they initially emerged in order to contribute to a critiquing existing school structures that threaten the mathematical well-being of many learners. 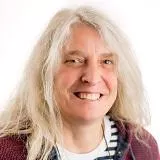 Professor
Lulu Healy is Professor of Mathematics Education at King’s College London. Her research focuses on the challenges associated with building more inclusive school mathematics and in understanding the mathematical practices of learners with disabilities.
VIEW PROFILE
Hosted By